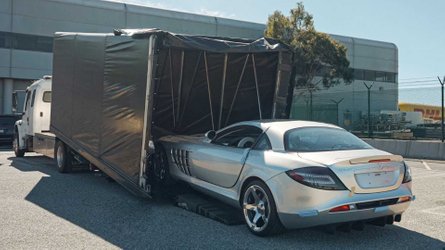 Produced between 2003 and 2009 in limited numbers, the Mercedes-Benz SLR was a joint project between the German company and McLaren. At the time, Mercedes owned 40 percent of the British firm and the two automakers teamed up to create one of the greatest grand tourers in the history of the automotive industry. Just 2,157 examples were assembled in coupe, roadster, and speedster body styles. One of these units is now officially modified by the McLaren Special Operations division.

After the production of the SLR officially ended in 2009, McLaren decided the car deserves special attention and the brand’s MSO branch offered upgrades for 25 customer cars. The car you will see in the video here is a bit different as it was sent to MSO just recently for some visual and mechanical tweaks. This SLR is owned by Manny Khoshbin, a real estate mogul, who owns not one, not two, but nine SLRs from different years of production and with different specifications.

The 10-minute video at the top of this page takes to the delivery of the one-off SLR Heritage Edition by MSO. It’s a stunning silver SLR with new front and rear carbon diffusers, new wheels, upgraded aero, and several smaller touches. The cabin gets visual tweaks like a new steering wheel, gear shifter, parking brake lever, and very special seats.

Unfortunately, we don’t receive information about the mechanical tweaks of the car, though Khoshbin demonstrates the new exhaust system with a button activating an even more enhanced mode. Even in stock form, the 5.4-liter V8 engine under the hood generates 617 horsepower (460 kilowatts) and 575 pound-feet (780 Newton-meters) of torque. With the new exhaust system, it sounds absolutely insane and Khoshbin even says it’s the best sounding car he has in his garage.

We will likely see more of this SLR by MSO and its new owner intends to bring it to auto shows. More interestingly, he is planning more videos with direct comparisons with the regular SLRs he has in his garage.