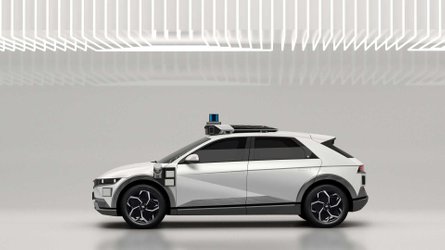 Hyundai and their driverless mobility venture Motional unveiled their new Ioniq 5 Robotaxi. Hyundai claims that the Ioniq 5 Robotaxi will be on the road in 2023 ready to take you to your destination without a driver. With SAE Level 4 autonomous vehicle ratings the Ioniq 5 Robotaxi is projected to take taxis with drivers a thing of the past.
Motional was formed as a joint venture between Hyundai and Aptiv a mobility solutions company in 2020. This collaboration saw the financial might of Hyundai married with the software and experience of Aptiv who currently runs a fleet of robot taxis in Las Vegas Nevada. The fleet that operates in Las Vegas still has a driver who sits in the driver’s seat to monitor the car just in case there is an emergency.

According to Hyundai, “The robotaxi has more than 30 sensors – a combination of cameras, radars, and lidar – that provide robust 360-degree perception, high-resolution images, and ultra-long-range detection of objects for safe autonomous operation in diverse driving environments. The robotaxi will be outfitted with Motional’s proven driverless technology, which includes advanced machine learning systems — trained on decades of real-world data — that enables the vehicle to safely navigate challenging and complex driving situations.”

As automakers continue to push for a future of electrification and driverless software solutions we expect to see other automakers make similar pushes. This unique plan to build and field a fleet of Robo taxis was famously proposed by Elon Musk who promised customers would eventually be able to use their Teslas as revenue-generating robotic taxis. It appears Hyundai may beat out Tesla on this promise with their purpose-built fleet of SAE Level 4 autonomous Ioniq 5 electric SUVs.

The Bugatti Chiron has finally been strapped to a dyno