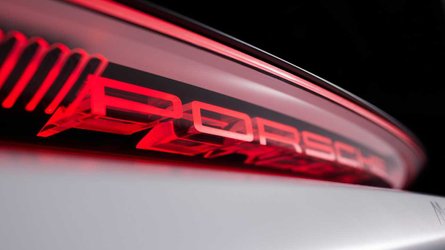 Livestreams haven’t been this mysterious in a long time as we genuinely don’t know what Porsche will be debuting later today on the dawn of the IAA Munich in Germany. We have been getting hints from the Zuffenhausen brand about the showcar being related to the exciting world of motorsport, but nothing really substantial to give us a clue about what to expect.

The description attached to the livestream on YouTube talks about how “Porsche has used its famed motorsport operation as the ultimate proving ground for its engineering innovations, prior to being introduced into series production.” We also get to learn the new concept car will combine “cutting-edge technology” with “breathtaking design.”

A closer look at the teaser image provided by Porsche shows what looks like to be the letter “M.” That tells us the concept’s name starts with an M, and we are tempted to believe the full word is Mission. Why? “Mission E” was used for a concept car at the 2015 IAA (in Frankfurt) to pave the way for the Taycan electric sedan.

Before you get too excited about the prospects of an all-electric successor to the 918 Spyder, Porsche has already announced a new hypercar won’t arrive before 2025. That letter “M” might make some people think about the next-gen Macan EV, but recent reports are indicating the zero-emissions crossover will go by another name to distance itself from the gas version.

Perhaps the Munich-bound showcar is an all-electric sports car to signal the Boxster/Cayman replacement coming in a few years. After all, Michael Steiner, Porsche’s executive board member for development, told Car and Driver earlier this year about the company’s desire to work on a Boxster EV concept. It’s being engineered on a new platform different than the PPE architecture debuting next year with the Macan EV.

We will know what’s what shortly as the livestream starts at 1 PM GMT / 9 AM Eastern.