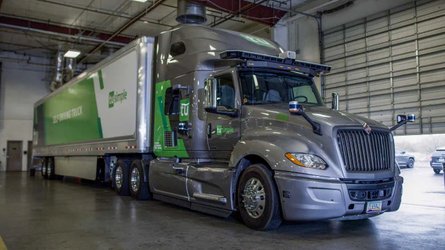 Self-driving vehicles are years, if not decades, away from becoming a mainstream reality. Semi-autonomous driving systems are good, but there’s still a wide gulf between the tech today and our promised autonomous future. However, there’s one industry where the tech could take off – trucking. TuSimple is designing self-driving tech for semi-trucks, and last month the company completed a cross-country haul of watermelons with minimal human input.

The journey took the fruit from the Mexico-Arizona border city of Nogales to Oklahoma City in 14 hours and 6 minutes. According to TuSimple, that’s 42-percent quicker than a human driver who would have needed to stop after 11 hours of driving to rest for 10 hours due to safety regulations. TuSimple achieved such a quick delivery time because it didn’t need to follow the same regulations as a human-piloted truck.

The truck completed over 80 percent of the 951-mile journey on its own, with a human driver piloting the truck from Nogales to Tucson and again from Dallas to Oklahoma City for the final 200 miles. This quicker delivery time could be a massive benefit for the produce, which reached its destination the same day it departed from Nogales instead of having it arrive the following day by a human. This would mean fresher fruit for consumers and less waste for grocers and growers.

While this technology could significantly improve efficiency, it will likely come at the cost of jobs, though such a transformation is still several years in the future. Self-driving trucks will need humans to act as safety and last-mile drivers for now; however, the company is planning to begin operating trucks without a safety driver by 2025. TuSimple already operates seven routes between Phoenix, Tucson, El Paso, and Dallas, with plans to add routes to Houston and San Antonio, according to SingularityHub.com.

Mid-cycle update on the way